Today the official opening took place of the expansion of the Stertil B.V. facility in Kootstertille, The Netherlands. The opening was performed by the Commissioner to the King for the Frisian Province.

Keeping an eye on the future, the global headquarters of the Stertil Group has been expanded considerably with 7,500 m2 of production and office space. 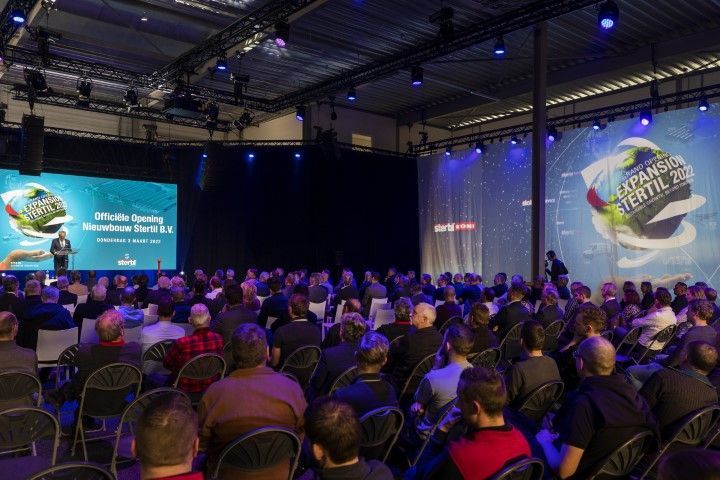 President and CEO of the Stertil Group, Ulbe Bijlsma, on the stage during the opening of the expansion.

The expansion is part of a multi-million investment programme of the Stertil Group B.V. in its facilities around the world. The Stertil Group has shown its continued commitment to investing in the local regional strategic markets of its main sales and production organisations. There are Stertil sales and production organisations around the world as well as an established exclusive distributor and dealer network. The investments are a result of the continued success and popularity of the various products from the Stertil Group businesses. 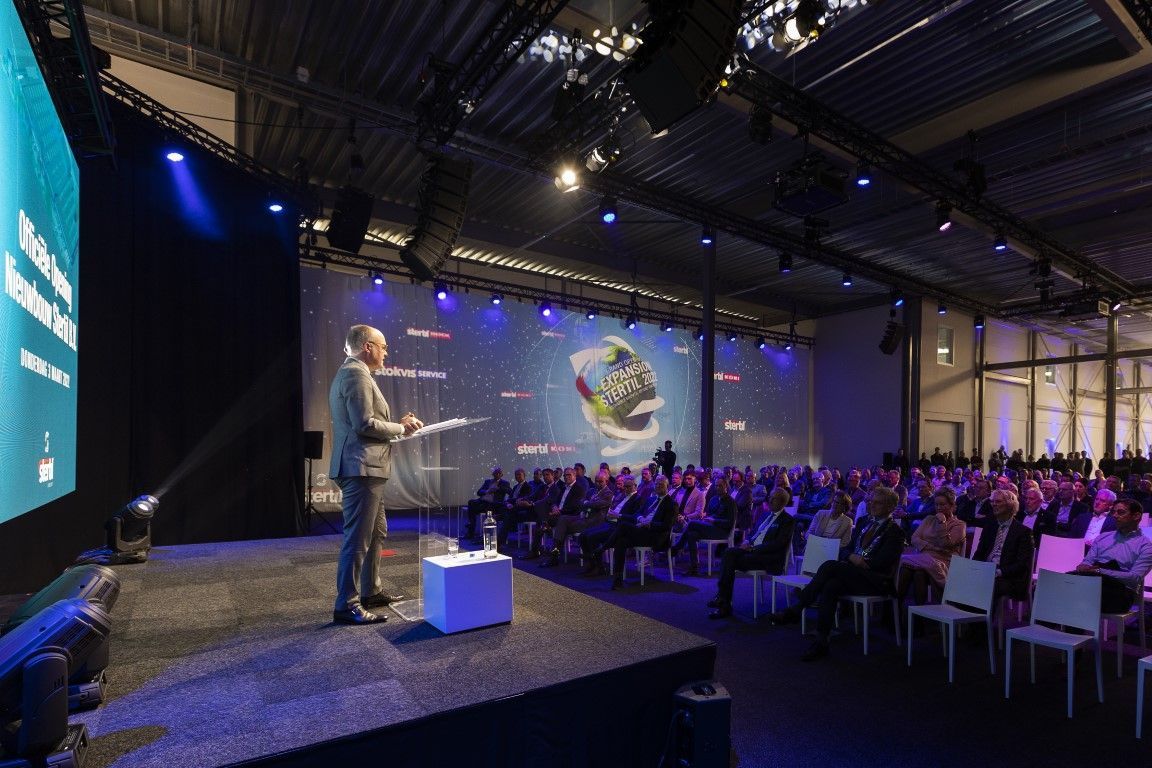 Mr. Arno Brok, the Commissioner to the King for the Frisian Province, addressed the management with the words: 'You and your employees have laid a solid foundation for the future of this company.'

Investing in a Sustainable Future

President and CEO, of the Stertil Group, Ulbe Bijlsma: “The significant expansion of 7,500 m2 involving an investment of about € 6.5 million is the result of number of developments.
The most important are the need for extra space to facilitate future growth, improving the efficiency, and wanting to contribute to Stertil’s sustainability”. An answer to the ever-increasing market demand for the Stertil® products and part of the Group’s long-term strategy commitment to the industries that its businesses’ serve.

The expansion at the Kootstertille site accommodates on-site logistics and storage capacity, as well expanding office space for the Supply Chain, Marketing and Sales departments.
Mr. Bijlsma continues: “Sustainability is important to Stertil, our successful Stertil-Koni EARTHLIFT® is a great example of this. This patented heavy duty mobile vehicle lift is regenerative, meaning that the energy is generated with the vehicle descent. In other words: regaining and using the gravitational energy to recharge the batteries. Also in the design of our expansion, sustainability has been the starting point: on the roof we have almost 1,100 solar panels, the building has optimal insulation and central heating water heat pump technology as well as a more efficient layout requiring less internal transportation with the use of electric forklift trucks”.
The President and CEO also points out the participation in a regional project “Ynnatura”, which was set up together with the Council to increase biodiversity on the Westkern industrial estate, where the Stertil facility is located. 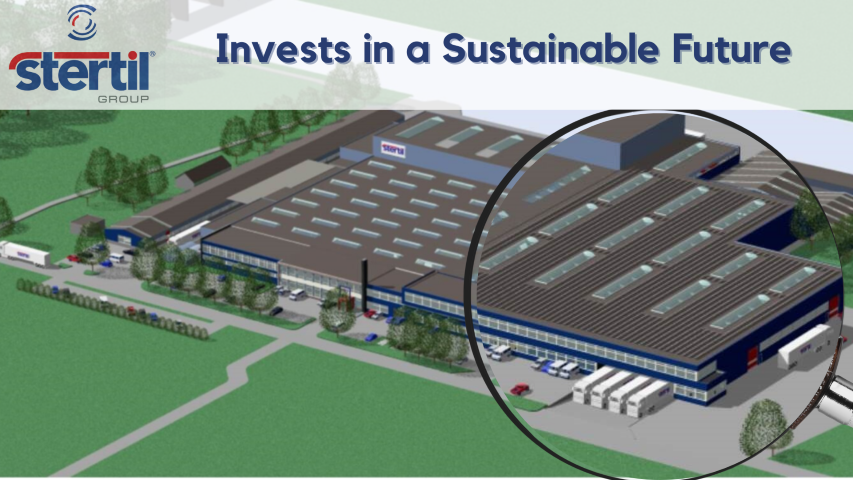 During the official opening four new loading bay docks were festively unveiled.
Stertil Dock Products is synonymous with well-designed loading bay dock projects throughout the UK and Europe. One of the new loading bay docks is equipped with the patented VARIFLEETTM leveller. This innovative telescopic lip leveller excels in being suitable for any dock, regardless of the height, and for any type of vehicle. Specific loading docks are no longer necessary, the VARIFLEETTM is an all-rounder, from lightweight vans to large tractor-trailer combinations, for complete safe, versatile and efficient loading and unloading.

As part of this expansion, Stertil has invested in a state-of-the-art “Experience and Knowledge Centre”  which will be realised and operational in the last quarter of 2022. The purpose of this new centre is for training and demonstration, as well as providing qualification and certification programmes on best-practices to the extensive network of International Stertil Service and Installation Engineers. The full product range of Stertil-Koni and Stertil Dock Products will be operational and on display.

Looking Further into the Future

Mr. Bijlsma: “The Stertil Group also took the opportunity to acquire an additional 6.5 acres of extra ground from the local Council that will ensure that the company can expand far into the future. Even more importantly, recently we announced that the Stertil Group has acquired Nussbaum Custom Lifts GmbH and Nussbaum World Lifts GmbH, in Kehl, Germany, as from 16th February 2022. A very reputable manufacturer specialised in high quality light duty vehicle lifts in the automobile segment”. 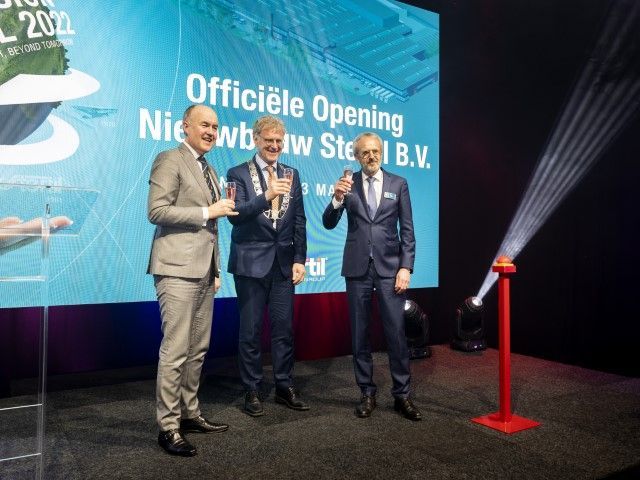 From left to right: The Commission to the King for the Frisian Province, Mr. Brok, the Mayor of the Municipality Achtkarspelen, and President and CEO of the Stertil Group, Ulbe Bijlsma.

The Commissioner to the King for the Frisian Province, Mr. A.A.M. Brok, spoke laudatory words during the official opening. He cited Stertil as an example of how entrepreneurship, innovation and vision go hand in hand with the ties in the local community of Friesland. “Stertil is an assent to the the region and an international calling card for Friesland”. He expressed his pride on behalf of the municipality. “Stertil has experienced many developments and economic crises over the years, but its wings have spread and the company is now active all over the world. Here is a stable and healthy company. With today's expansion, Stertil is even more anchored in the region. This anchoring creates a connection with the community. Leading when it comes to innovation and being active globally, from the United States of America to China, the question is whether this well enough known in Friesland? We should perhaps be a little more proud of our larger companies, and Stertil is one of them. They deserve to be in the spotlight. On a day as today, but also tomorrow and the days to come.”